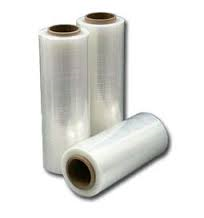 Palletwrap, pallet film or stretchwrap, or whatever you choose to call it, comes in a few different grades, colours and film types. It can be a little confusing.  The two main types of pallet wrap or stretch wrap are Cast films and Blown films.  This is based on the extrusion process.

Cast stretch film, also known as cast stretch wrap is created by feeding a sheet of heated resin along with a rolling path with chilled rollers. The cooling solidifies the film, and it is made into large rolls.

The cast film process involves the extrusion of polymers melted through a slot or flat die to form a thin, molten sheet or film. This film is “pinned” to the surface of a chill roll (typically water-cooled and chrome-plated) by a blast of air from an air knife or vacuum box. The film quenches immediately and then has its edges slit prior to winding.

Because of the fast quench capabilities, a cast film generally has much better optics than a blown film and can be produced at higher line speeds. However, it has very little film orientation in the cross-direction.

Cast film is easier to use as it comes off the roll easier and it is better for lighter products stacked on a pallet.  Cast film is really clear so it makes it easier for scanning machines to scan barcodes through the film.

Benefits for cast film is that it is very clear and very quiet coming off the roll.

We stock a hand Cast film which is 500mm wide. This is a good general purpose hand wrap for most applications. However, our biggest seller is still the Blown Hand Palletwrap

Blown stretch film, also known as blown stretch wrap, is created by blowing heated resin out vertically into a bubble. The bubble is then transformed into rolls while it is cooled by the surrounding air. Blown film has a higher resistance to puncture, so it is good for wrapping sharp edged products, it has a higher cling level and is noisier coming off the roll.

We stock blown film in a hand wrap at 500mm wide – our biggest selling palletwrap.  It is also available in machine wrap in different grades.

The most common application method is wrapping a pallet by hand. We sell a single roll at a time and it’s as simple as getting a roll and a couple of plastic end bungs (to protect your hands).

Tie the end onto the base of the pallet and start wrapping. The best way is to unwind some then to pull/stretch it onto the pallet. The palletwrap will stick to itself.

There are plastic end bungs that you put in the end of the roll so you don’t get a cardboard burn or you can use a metal tensioning hand held dispenser.  Most people are happy with plastic end bungs.

If you have a bigger requirement and think you be needing an automated machine, we can send someone out to see you and discuss your specific needs.

Protect your employees and site visitors with 3M Vinyl Floor…